The smoke control system depended heavily on the Metasys® HVAC field devices and supervisory controllers. The HVAC and Smoke Control systems were intimately connected; touching either subsystem could have a major impact on the other. The new BACnet 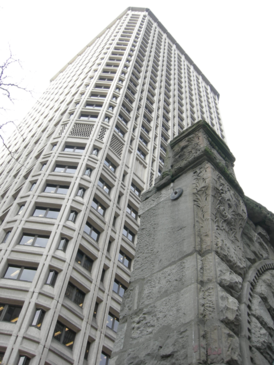 “We were very apprehensive; we knew that this had never been done before, but were prepared to do whatever was necessary to make it happen. Our biggest concern was ensuring it happened right the first time – this building is fully occupied, and a failure of the Smoke Control panel would be a very significant issue to the owner.” -John Arwine, ATS Automation.

The building was to remain occupied during the upgrade and GSA mandated zero interruptions to tenants’ activities. VAV boxes

and most of the N2 bus wiring were inaccessible, as they were installed above ceilings that were heavily contaminated with asbestos. Asbestos abatement would have added millions of dollars to the cost of the project, along with displacing building occupants. Zero downtime of mechanical systems and controls was allowed during normal business hours. The requirement was to achieve a completely seamless migration to the new system.

Gain Access to the Legacy BAS and Smoke Control Systems

The first issue encountered was that the S4 Open: BACnet-N2 Router was not UL Smoke rated; a normal requirement for smoke control systems. However, the design scope depended upon an integration device cohabitating on the N2 trunk with a JCI NCM, and only the S4 Open appliance could do this. So ATS sent this question back to the owner’s rep – How do we accomplish your scope if there are no approved products? The owner’s rep. requested a decision by the Authority Having Jurisdiction (AHJ). Note that this is a Federal property, and is governed by the Federal Fire Marshal, not local authorities. In the end, ATS received the authorization to use the S4 Open Appliance on the Smoke Control network without it being UL approved.

After approval to move forward, ATS mounted new Alerton BCM building level controllers and performed as much pre-wiring as possible. Next, a S4 Open: BACnet-N2 Router was installed with each existing NCM to allow the new Alerton head end to co-exist with the Metasys® NCMs programmed for HVAC control, the Smoke Control NCM, and the Operator Workstation during the planned transition period. After these preparatory steps, ATS continued with the integration.

The Configure Wizard for each S4 Open: BACnet-N2 Router automatically discovered the N2 devices on the bus, provided BACnet point mappings, and activated the co-existence capability of the N2 Router, giving both the NCM and the Alerton BACnet head end equal access to the devices on the N2 bus.

With 2,300 occupants in the building during the upgrade, the impact of any false alarm causing an evacuation of the building would have been catastrophic. Caution was the rule: ATS began testing by reading and writing the data from Envision graphics, but without truly taking over control of the building.

ATS wrote software in the Alerton BCM global controller to control and optimize the JCI VAV boxes. They worked at night and on weekends to avoid disturbing building occupants, installing and testing their sequences through the S4 Open: BACnet-N2 Router. ATS would then remove the code after testing, letting the NCM run the system during the day. The downstream adapters
and upstream cable provided with the N2 Router facilitated easy changes in configurations as required.

ATS planned to follow the S4 Group’s recommendation of co-existing with the Metasys® head end during a transition period.

Aware that the JCI N2 trunks were heavily loaded, the ATS team took advantage of the ability to split trunks in several locations where the wiring could support it, thereby improving trunk loading. ATS also wanted to avoid the risk of coming up short on capacity if unexpected equipment were to be discovered on the network. The S4 Open Routers built-in statistics and performance metrics were instrumental in determining where N2 trunks were overloaded and provided a confirmation of improved performance.

The final step of the migration plan was to phase out the NCMs one at a time. After all of the Alerton BCM controllers were in place and programmed, it was discovered that scheduling data could not be easily deleted from the NCM one at a time, and writing to schedules from both control systems was problematic In response to this unexpected issue, the S4 Group provided a major enhancement to the S4 Open: BACnet-N2 Router, the ability to force N2 transactions coming from the NCM to utilize the BACnet Priority Array mechanism. This created the ability to move away from dependence on the NCMs one point at a time and smoothly complete the phase out process, and maintain the integrity of the smoke control system. This Supervisory Controller as a BACnet Client feature is now a standard part of all BACnet-N2 Routers.

All pieces of equipment had to be cutover on weekends and ATS employees worked around the clock. After every cutover, but before occupancy, the smoke control system associated with that portion of the system were fully tested. The system was put into alarm and cycled through every mode of smoke control. Many portions of the system were tested multiple times because they overlapped with several phases of cutover.

After processes were in place and fully tested, the NCM’s were removed and a fully functional integration with the smoke control application was implemented on the Alerton BACnet global controllers. ATS implemented some of the complex sequences in their global controller because the legacy VAV controllers could not support the required logic.

Once the entire facility had been cutover and had passed a 100% confidence test (testing in phases every weekend) and documented, the Federal Fire Marshal was contacted to schedule a formal final test.

• Test the interface extensively on a small section and perfect it before making a big deployment.
• Establish a relationship with the other contractors and the owner to approach and accomplish the project as a team. It pays off in the long run.
• Make sure that the manufacturers involved are part of your team and committed to the job.
• Have a methodology to do all the software sequences you intend to perform without any help from the VAV’s. In this case, some complex sequences were implemented that would normally require software in the VAV controller that these controllers would not support.
• Be mindful of traffic levels: The N2 trunk runs at 9600 baud and would be passing a lot more data than the previous system ever had. The trunks were heavily loaded with controllers – up to 125 on a single trunk. In this case, asbestos in the ceilings prohibited engineers from redistributing controllers on trunks.
• Ensure you have the software tools available to replace field controllers in the future. For Metasys® N2 devices the essential tools are the HVAC Pro and GX-9100 utilities. And, most importantly, take a full backup of all controllers before you start.
• The ComBus Quick Tester (Source from The S4 Group) is an excellent investment. Use it to validate that the legacy equipment is properly installed and functional before starting the integration.

The Building Today: A Model Upgrade

The new system is completely operated by an Alerton BACnet front end. All new Alerton controllers were installed on large built up AHU’s, chiller plant, steam heat exchangers, existing boilers, but ATS was able to make use of the existing JCI VAV controllers on 1200 Dual Duct boxes, a half dozen or so computer room units, and one NCM running the Metasys® smoke control application with a dozen JCI controllers downstream providing smoke control functionality. Alerton BCM global controllers collect energy data from dozens of electrical, steam, and water meters. S4 Open: BACnet-N2 routers are installed on every N2 trunk.

The end user is quite happy with the new system – a state of the art Alerton BACtalk control system that is easy to operate and allows for E-mailing of alarms, energy reporting, and secure web access-- all while saving several million dollars on asbestos abatement / control issues that would have been required to replace all of the VAV box controllers. Federal agencies are looking at this as a model retrofit / upgrade project.

The ATS management team has a strong local history of meeting customer commitments. This reputation and demonstrated commitment spans a quarter century in our local marketplaces. All ownership is local, and the entire management team shares a long history and trust in the building automation industry.

Their Seattle area office has created a unique work environment for our employees, combining tradition with modern technologies and innovation. The office is located in the historic "Old Milwaukee Substation" which produced DC power for the Burlington Northern rail line dating back to 1916. A recent addition incorporated many contemporary architectural and energy conservation strategies which further reinforce the ATS commitment to both employees and customers.

About The S4 Group